Steve Irwin (1962-2006)
One of the greatest leaders in wildlife education will always be remembered as "The Crocodile Hunter" His passion for nature and life-long mission to save wildlife will not be forgotten.

This account was originally created by the admin for the purpose of giving credit to Dave Malak for the content of the site that preceded this wiki. He was the original owner of WNYWildlife.Com, and after deciding to let it lapse, agreed to pass the site on to Ken Stucyznski, the owner of the company that provided hosting, Kentropolis aka Kenhost.

All of the original photographs are Dave's, taken locally between 2004 and 2007, and along with the old site's content, are used here with his permission. Additional photography can be found at his Flickr site.[1]

The original site's pages with content that have been reconstructed are: 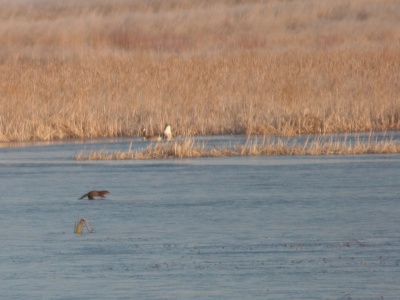 River Otter (Lutra canadensis) - 03/16/09 - © David Malak: I photographed this otter on the ice at Cayuga Pool. This is the first confirmed sighting on refuge property since 1988!

This is a list of wildlife observed since the end of 2004. The photographs referenced are not linked in the document, but can be found throughout this site.